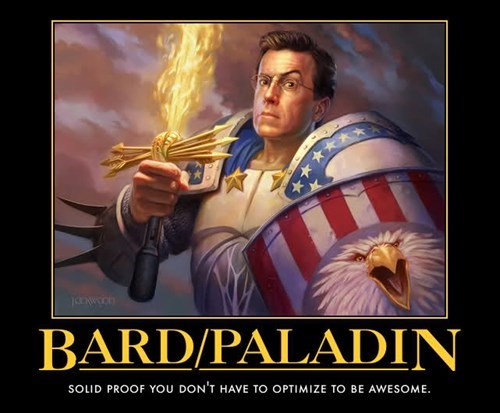 I came to a realization recently: I’m actually not very skilled at RPGs. I mean, I know the rules, I understand the game concepts, I’m well-versed in the mechanics, and I enjoy playing. But I’m not any good at maximizing stats or synergizing abilities to wring the highest combat potential from each game session.

I will never win at RPGs, in the traditional sense. And that’s totally fine.

I think this is because my first gaming group was rarely interested in completing campaign objectives, much to the chagrin of our DM. The players were more focused on crafting interesting worlds and exploring character relationships for agonizingly long stretches. Plot, combat, loot, and gaining experience seemed to be secondary considerations. For nearly a decade it was the only kind of role-playing I knew.

When I turned 13 I joined that group as they were tackling a 2nd edition Dragonlance campaign.  After a few months playing as an NPC I was finally allowed to create my own character. My brother sat down with me and we rolled up Darion Woodlord, a courtier and diplomat who had pledged fealty to princess Alhana Starbreeze. Alhana sought to reclaim the Silvanesti homeland of Silvanost, which had been twisted and corrupted by Speaker of the Stars Lorac Caladon, who had fallen under the thrall of the great green dragon Cyan Bloodbane.

If you’re curious, no, this storyline was not lifted from The Two Towers story of Gríma Wormtongue and King Théoden and how dare you.

Anyway, Darion was meant to be a kind of militant minister; an armed ambassador; a dangerous diplomat. I decided to play him as an impudent murderous psychopath, because I was thirteen and killing was so much more interesting to me than role-playing.

So Darion killed. A lot. And it turns out he was pretty good at it. Unfortunately, in the midst of the quest to save Silvanost, Darion was blinded by a spell during one of the encounters. Our DM asked me if he had the blind-fighting non-weapon proficiency.

I hadn’t chosen any of my proficiencies (my brother had handled this detail during character creation), so I looked at my character sheet and griped, “Nope. All I have is stupid etiquette and heraldry.”

The group burst into fits of laughter that lasted a good 3 hours or so. Decades later I was still being gently teased for this remark. It is probably one of the most memorable things that I had ever done within the group.

At the time I didn’t get it. Part of me is still reflexively defensive about it, but I understand now why they found it so funny.

First of all, for those who don’t know, 2nd Edition D&D was full of these weird little options that had little-to-no practical applications in the game. I would defy anyone to tell me that, at any point in their gaming career, they rolled an Agriculture (Int/0) or Cobbling (Dex/0) check. 2E had a ton of flavor text like this. As a dumb 13 year old, I couldn’t imagine a time where I’d need to decipher a heraldic symbol or differentiate between the salad fork and the dessert fork.

Now that I think about it, maybe I was just getting trolled by my older brother.

Anyway, this was hilarious to the group I played with because they were the kind of guys who would spend agonizingly long periods of time simply role-playing their characters; just sitting and ostensibly bickering amongst each other. We’d go multiple hours-long sessions without a single initiative roll. There would be periods of time where individual players would go on side-missions, pulling the DM into the hallway for what felt like an eternity. Most of the players kept their character sheets and details hidden from each other, and the DM shared information privately to individual players to avoid metagaming. The campaigns trudged along at a snail’s pace, which I thought was just the norm until I started playing with other groups.

Role-playing my character in this group was often incredibly nerve-wracking. Consequently I never rolled a character that could be considered a leader type. I usually chose characters that were either straight comedic relief (the drunken idiot dwarf, the insane gnome illusionist, the smart-ass halfling rogue) or quiet/sneaky/reserved supporting cast (the brooding ranger, the befuddled wizard, the distracted cleric). Any time I tried to play a character with a leading role I would just bumble over myself whenever I was in-character, to the great amusement of the rest of the group.

To be clear, I wasn’t being bullied or anything. I was just a teenager playing in a world populated by incredibly intelligent 20-somethings. The ribbing was done affectionately. I assume.

The point is, Darion was supposed to win D&D. I wanted him to slay the dragon (which we did), save the princess (in this case the Speaker; also done), and save the world (which we did). I metagamed the hell out of him. I ignored most out-of-combat interactions and perked up only when I got to roll a d10. I wanted him to be a badass. I just wanted to fight and win and kill.

I’ve come across quite a few players who are still in this mind-set. Their character is a collection of amazing stats, feats, and skills, covered by a thin veneer of “personality.” It’s not necessarily wrong to game this way, of course — there is no “correct” way to play any RPG. But personally, I found it to be unfulfilling.

I’ve found that failure, which is an integral part of any RPG, completely undermines the badass persona. Your raging berserker charges into battle only to miss a save and spend the entire combat sleeping. Your master wizard fizzles a spell which blinds the entire party at the start of combat. Your ninja rogue fails his stealth roll and alerts the compound to his presence, et cetera. Badasses can’t make mistakes, but you are going to make mistakes in an RPG. It’s inevitable.

I’ve had the most fun playing my least-useful characters. For example, a recent game of mine featured a Paladin of St. Cuthbert named Don Miguel Alonzo de la Rosa, loosely modeled after Don Quixote. He was a man in his late 50s who, after banging his head pretty heavily after falling from a horse, decided to ditch his tiresome family to pursue a life of adventure and glory. His ability scores were quite weak, his skills were all over the place, and as a paladin he was barely functional. But I fell in love with the character concept, and he was great fun to play.

Since he was a late addition to the group, Don Miguel had to do a little solo adventure to catch up. He rode out to an abandoned keep that the party had entered earlier and began peeking around. As the player, of course I knew exactly where the group was, but Don Miguel had no idea, so he began searching. Loudly.

At one point he threw open a door and encountered a spectral undead creature chained to the wall that the group had bypassed. Again, as a player I know I needed either silver or magical weapons to hit it. But Don Miguel simply saw a vile abomination that needed to be eradicated. So he charged, screaming a battle cry to the glory to St. Cuthbert.

So now I had a phenomenal chance to figuratively tilt at a windmill in my very first session as Don Miguel. It was an un-winnable fight, but I sure as hell felt like I was winning.

Fortunately Sancho, in the form of the party members who had heard his battle cry, came to his aid and pulled him to safety.

Don Miguel was a lot of fun. He eventually found his Dulcinea (a libidinous female rogue in the party), he was nearly murdered by elves (and became instantly racist), he bravely faced down a charging umber hulk (© Wizards of the Coast), and he spread the word of Cuthbert across the land while failing miserably at the quest that the church had sent him on (due to some ridiculous treachery by another PC). It was a blast.

Some will say that the only way to win an RPG is to have fun, or not die. Still others will argue that winning a campaign is how you win an RPG. Personally, I win an RPG when I experience one of those cool story moments, and play my character in a consistent and memorable way. If he fails the quest and/or dies, at least I can be proud of my contribution to the story. That’s my win.

Next
Behind the Screens: Tips for New GMs

Character concept and story are infinitely more fun than ‘winning’. I applaud your ‘failure’.