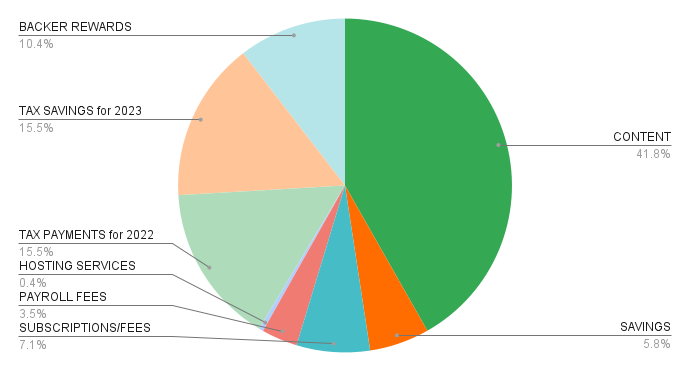 Why Now’s A Great Time to Support Saving Throw

With the end of the year rapidly approaching, I’ve launched a new fundraising endeavor. A fundraiser to END ALL FUNDRAISERS! Ahem.

One that, if successful, could mean not only the continuation of Saving Throw and the development of new, much needed and asked for content, but also the ability to produce without intervention. No mid-game requests to take you out of the moment, no constant pleading on social media. Just the content you want.

You’ve seen the tweets, the videos, the comments back and forth regarding the need to support a resource like Saving Throw. What does supporting a channel like this mean? Who benefits? How much is enough? And, the biggie, why even bother?

Becoming a sustaining member of any enterprise sometimes seems daunting. Questions like “does this have value to me?” and “will that value increase?” are often bandied about like hotcakes. So let’s talk about that value.

Since 2013, Saving Throw has to date added over 5 months – yes, MONTHS – worth of content on our YouTube. Close to 250,000 minutes! From actual plays to deep-dives on rules, how-tos and reviews – we’ve got content for nearly any taste. But that’s another post. Now, the average cost of that content for me averages about $5/minute.

Saving Throw has never had a paywall and so our content has always been free to watch and engage with. Any income we’ve received from viewers like you was at your own volition, something that cannot be understated. Through the entirety of Saving Throw, that income has come in at roughly $1/minute.

Unfortunately, I’m just not able to make up that $4 difference anymore. The reason we make those “annoying” asks for tips during our shows and sustaining member drives like the one we’re doing now, is to literally keep the lights on for the channel. If you don’t like those asks, but DO enjoy our content, I implore you to consider becoming a sustaining member. Here’s some more detail…

I’ve always been transparent about where your support goes. But, quickly, here’s where it goes each month:

The current income Saving Throw receives (predominantly through Ko-fi) meets about 35% of these expenses. I’ve been paying the rest out of savings and my own pocket. Saving Throw has largely been able to subsist on 2-3 generous tippers during shows and ad revenue to help support the other costs. But that’s not an income we can rely on, clearly. Despite my best efforts to prolong those savings it’s slowly dwindled to nothing. A monthly income allows for me to actually plan for the future, and know Saving Throw will be OK.

The bulk of that Content portion consists of cast payments. But it also includes all the graphics, music, marketing, equipment maintenance and more required for each show. Some shows cost more, others less, depending on the specific needs of the show in question. And the more episodes we can make, the less these costs are over the run of the show. We don’t need to get character art redone for every episode, for instance.

My goal of 600 Ko-fi sustaining/monthly backers will meet these costs and provide Saving Throw the breathing room it needs to produce content. And if we were to be so lucky as to push past that goal? My word, the wonders we could create!

For just $5/mo you get access to thousands of dollars (and hours) worth of past content – content you didn’t even have to pay for! In return you help subsidize NEW content covering games you want to see. You get a vote in the content I produce in the future. You also get swag, merch, one-page adventures every month, VIP access to our convention events, the ability to add banes & boons to our actual-play games and more!

And this isn’t a thing where you have to give big bucks just to get some of those things. Every tier gets the same stuff! So whether you give $5/mo or $50/mo you get the same things – maybe some come a little faster if you give at the higher levels, but the same none-the-less!

PLUS – if we hit our goals, we can dial back the asks. Like, nearly completely. We can relegate them to easily avoidable sections of our live plays. We can edit them out of VODs more easily. We can keep things to a bi-yearly fund-drive like NPR. And every additional new backer gets us closer to new goals as we build the channel together. So for $5/mo you help us steer our content to be more of what you want and less of what you don’t need.

The more people who can support, the more valuable your monthly pledge becomes. You get access to a lot more content and your $5/mo (or more) goes even further. It means the more we can give back to the community. It means we can not only produce the content you’ve been demanding, but we can start planning a future of truly independent RPG content. Like animated specials, narrative series, and more!

BUT WHY SHOULD I SUPPORT SAVING THROW SPECIFICALLY?

I’m not going to go at length about why you should give money to Saving Throw when content providers like Netflix, Disney+ and others are all vying for your watch time. I don’t know about you, but I back a lot of those and none of them give me RPG content like Saving Throw. Not to mention at $5/mo that’s less than HALF of what one of those content providers charges. So $5 for all the RPG content I really need? No brainer.

“OK,” you say, “but I never got paid for playing an RPG, why should I pay for you to?” I get it. Many of you are far more knowledgeable about RPGs than myself. You probably enjoy deep-dives into Forgotten Realms lore, have back issues of Dungeon magazine at hand, and are up to speed on the latest OSR release. And that’s great! I’ve been playing for nearly 40 years and am learning something new every day. But are you also presenting that information to an audience? On a deadline? There’s a large divide between armchair producing and actually mounting a channel like Saving Throw.

But certainly, with so many other purveyors of RPG content, what about Saving Throw makes it a worthwhile value? Everyone’s going to have a preference, and there are certainly many other just-as-worthy candidates for your hard earned dollars. And nearly all of them have a Patreon or Ko-fi or Kickstarter-adjacent tool they use to raise bucks. Here are some examples of how Saving Throw is a unique contributor to the RPG space and worthy of your coffee-money.

First up, Saving Throw’s core values. These are the tenets that I base EVERYTHING we do on: INSTRUCTION; DIVERSITY; PRODUCTION; FUN.

From the beginning Saving Throw has made a name for itself as a showcase for independent RPG systems, and a diversity of players. Sure, we’ve played our fair share of the dragon game, but the overwhelming bulk of our content lies in non-D&D brands. From popular systems like Savage Worlds, FATE, Pathfinder, World of Darkness, Mutants & Masterminds, and Shadowrun to lesser known RPGs like Cold Shadows, Good Society, Over Arms, Lasers & Feelings, and many, many more. Truly, at last count we’ve played over 80 different systems – some over multiple sessions. So not just a one-and-done showcase, but an in-depth review through gameplay.

While the industry has become saturated with D&D shows (or, Vampire, it seems), Saving Throw has consistently touted smaller RPG publishers. For years I’ve sought these publishers out, scouring Kickstarters, going down social media rabbit holes, and, of course, asking all of you! Your monthly pledge gives me the resources to continue that search and promote these systems.

And I’d be remiss if I didn’t mention how every show is crafted with the idea that you could watch an episode and pick up the system the next day. Instruction is a huge key to appreciating RPGs, and with so many RPGs out there it’s vital to have a resource like this.

I am committed to diverse casting, and casting the right people for the story at hand. Not every player is perfect for every table, and I like to think my casting eye has resulted in some truly epic storytelling adventures. Actual Play performers have a tough job. Every grognard feels they could do just as well, or better.

But in actuality the performers I hire tend to have extensive experience – either on stage or in front of a camera, or both. It’s a massive shift from playing at a table with friends, to playing before an audience, let alone an audience you can’t see or hear, and still making it entertaining for all involved.

Saving Throw is committed to being an outspoken supporter of the rights of our performers. I am very careful with my casting, and I treat our performers as I would like to be treated were the roles reversed.

With so much hurt going on in the RPG space it’s important to me that Saving Throw bucks the trend of supporting “bad actors” simply because they’re popular and may draw an audience. This opens our table up to so many unique voices, and that makes the stories we tell so much more effective.

I promote causes that enrich all of our lives because I believe a rich, diverse foundation can only enhance the role-playing experience. Together we’ve raised over $72,000 thanks to viewers like you and for a variety of causes. Through your new and/or continued support we can do even more!

Production value is also a core tenet of Saving Throw. This ain’t no kitchen-table excursion. From the get-go I’ve insisted on providing the best experience for our viewers and listeners. As best as I could afford, at any rate! Your monthly support goes towards furthering that pledge and ensuring future productions are accessible to all, regardless of their entry point. From live captions to podcast versions of our streamed games, edited versions for those on the go, and more – your support helps make it all happen.

Our community – your fellow supporters – is a family. We talk, we laugh, sometimes we even cry together. The mods I have on the channel work for nothing and yet have crafted one of the finest, most welcoming and safe space for viewers I’ve ever seen.

Lastly, I listen. And, hey, sometimes what you viewers want doesn’t line up with the channel’s core values. But my goal is to produce the content you’re looking for. It’s also the content *I* want! It’s this actively symbiotic relationship that really propels the channel. It’s not just the Saving Throw way, it’s YOUR way.

If you still feel like it’s not worth it to you – no problem. You don’t need to tell me. And guess what? You’ll STILL be able to watch our content thanks to what others have given. So be supportive of those folks! They’re doing the heavy lifting so you don’t have to!

Give whatever is in your ability to give – whether it be $5/mo, $50/mo or just simply sharing a video (or this post) with friends!

Next
Twitch Clips of the Week: The Few and Cursed Learn-2-Play