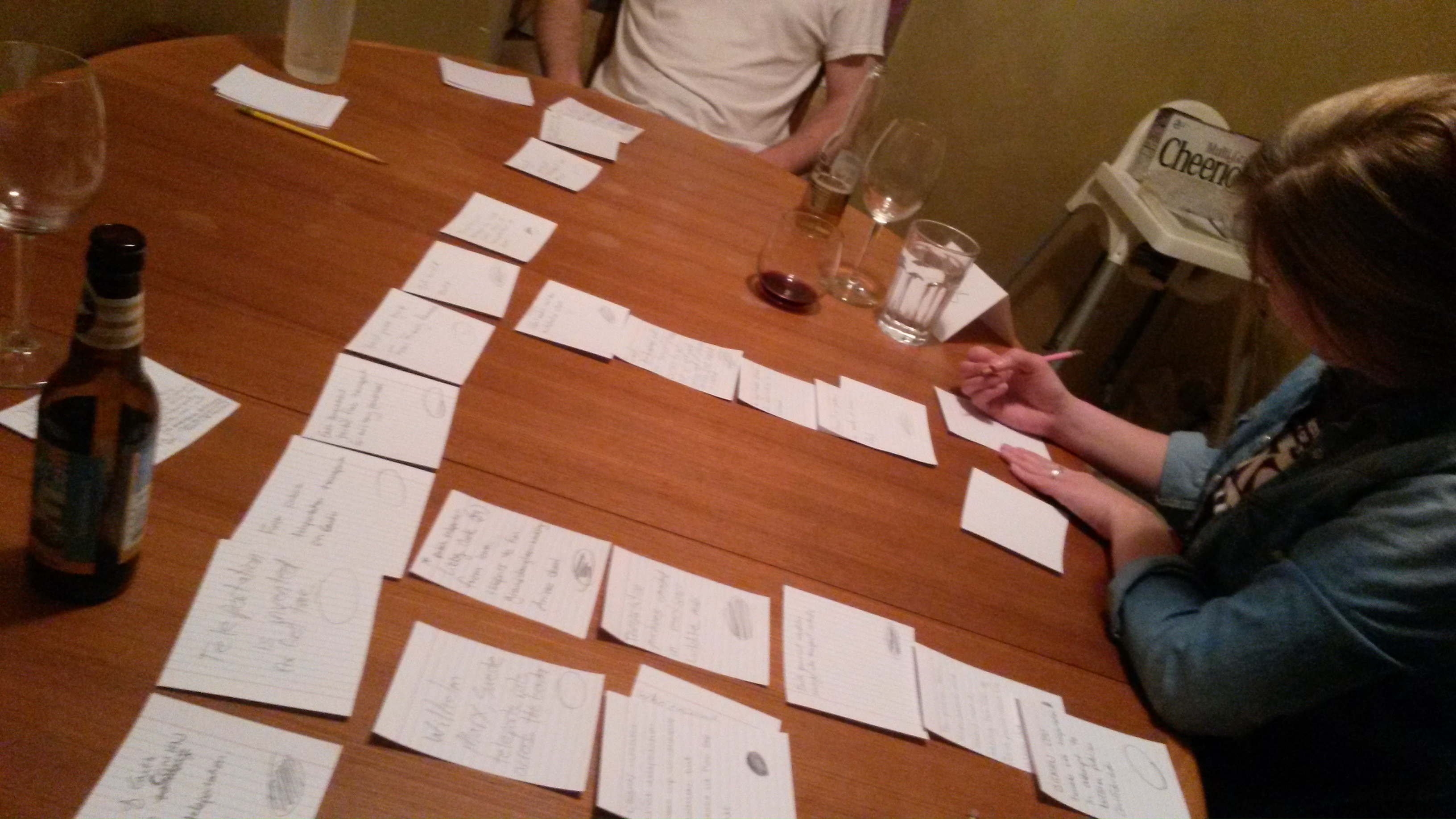 Putting ‘Microscope’ Under the Microscope

History is portrayed in many ways in popular culture. In history class, it’s a spelled out list of cause and

effect. In Back to the Future, we fear paradoxes and alternate universes. In Doctor Who, it’s just a bunch of wibbly-wobbly timey-wimey stuff. In Microscope, an… well, it’s not quite an RPG, we’ll get to that… from Lame Mage Productions, time is a flowchart. It always works within itself, but it’s never beyond changing. That’s where you come in.

You play Microscope by creating, detailing, and following a fictional history spanning centuries or millennia. First, though, you have to pick the span of time you want available through vague starting and ending events. For example, you may want to explore the settling of a new Earth in the age of space exploration. You’d pick your starting point to be “The journey is financed” and the end point can be anywhere from “Meteor smashes into world” to “Heat death of the sun.”

After those incredibly vague (it’s a good thing – you have so much wiggle room) points are picked, you begin splitting up history into three sections. Periods are the widest reaching, then events provide a bird’s eye view of a situation, and finally scenes acted out by the players improvising the specifics of a single moment.

This is all accomplished by way of flashcards sitting in chronological order, with events beneath the periods, and the scenes underneath those events. The kicker? Although the notes and your cards are in chronological order, there’s nothing that says you have to stay in the same order. You can go from the first ship to leave the colonists’ homeworld, to the war for independence, and back to the homeworld’s prehistory all in three turns. As long as nothing you write directly contradicts your previous events, you can add anything in at any time, casting your game’s entire established future into a new light.

One tip though: the wider your POV is, and the more open the ‘prompt’ is, the easier you’ll find the game. My first play through, we decided that humans had invented teleportation. I had a good time, but I think we hemmed ourselves in a little bit too much – there was very little traditional conflict, and our group became mainly concerned with manufacturing some instead of finding it naturally.

The game is played without a GM, without a manual, and without a set idea of where it’s going. It’s incredibly freeing, coming from a GM, to get to cast off the shackles of being the prepared one and allowing yourself to become just another player. If you save your notecards in order, you can simply lay them back out and resume the game where you left off.

Microscope’s not really a traditional RPG, and it’s not trying to be. Instead of investing yourself in a character and exploring that person’s actions in order, you divorce yourself of all ownership of everything, from people, to institutions, to societal values themselves. At any time, your friends can undo what you’ve done by changing history, or by unspooling your plans for the future. Don’t get too attached to your charismatic president that rose to power – the next person in the rotation can have him assassinated without any problem.

Because of this, I’m having trouble talking about Microscope as a “game.” To people who love the Tolkien-style “Lo, this sword was forged by Buttchin the Blacksmith in the time of King Curlyhair” storytelling, this game will cater almost directly to you. You can create those lasting immortal legacies and only need to check the back end of the table to make sure you’ve got it right.

To me, though, it feels more like a tool. A means to an end. I didn’t have “fun” while playing Microscope, but I was never bored. I don’t have “fun” when creating campaigns for D&D, and I love doing that. This game can completely fit into any creative world-building endeavor you have. This would be AMAZING for a hardcore D&D group to build a world first, and then jump in at the end, lorebooks already written and a realistic knowledge of history instead of all of those skill checks and awkward explanations. A creative writing workshop could get months of prompts from a half-hour of playtime.

In short, you won’t have the experience of jumping over a bar and plunging a knife into the bartender’s neck because you think he’s a doppelganger assassin cult member, but instead you’ll see the cult itself rise to power and wreak havoc in the government you set up.

Speaking of tools, this game could be played online, and semi-impersonally, allowing for a much more flexible experience. Much like Felix’s play-by-post article, using collaborative flowcharting software like bubbl.us allows you to play the game without the notecards and time spent scheduling (though I do suggest playing this game with an adult beverage of choice close at hand).

I originally balked at the $10 price tag. $10 for a PDF? It doesn’t actually exist! It wasn’t until I was on my way to play the game and spent $15 on beer that I realized how little $10 actually was. This game is well worth the price, and games can stretch for as long or short as you’d like. If you’re a print-or-nothing type, the game is also available on Amazon.

Microscope is amazing for what it is – but what it is is often difficult to nail down. The improv sections sound daunting, but are narrated in the same way that D&D can be, so it isn’t too far of a jump. Time’s flexibility is especially daunting, but becomes second nature once you start. I highly recommend this game to tabletop players who love their backstories and lore, or to people looking to create history from whole cloth. This game won’t apply too much to the dice-happy crowd looking to live out scenes by inhabiting a single character, or to the competitive min-maxers looking for the loot at the end of a dungeon. There’s no loot, no risk, and no rolls, but Microscope has more scale than you can imagine – because there’s always one more event to add.