Problems with RPG Streams & How to Fix Them

I’ve been producing liveplay RPGs for over 8 years now. Been in TV/Film & Home Entertainment production for nearly 20. I’ve run sold out panels on “How to Stream RPGs” since 2015. Even managed to have streaming RPGs be my primary day-job for a number of years. So when I tell you I’ve worked and tried almost everything in the genre, I have. But last week I tweeted something I’ve never really asked before:

Over 130 replies later, I’ve got a decent response list of common annoyances from RPG fans. Are these guaranteed solutions to RPG stardom? Absolutely not. I think CR commits nearly all of these annoyances and yet is several orders of magnitude larger than the next largest stream with no hints of slowing down. The response is also far from exhaustive, of course, and I would take the results with a hefty grain of salt. In fact, before I get into the results I want to talk more about the reaction to this tweet from streamers themselves.

There were…mixed reactions. Let’s ignore the fact that while it wasn’t tracked, I’d wager the majority of these responses were from viewers who watch 1-2 APs/week TOTAL. And one of those is probably CR. Still, some streamers were anxious to see the results in order to identify areas they could improve. But several larger streamer accounts derided the question altogether – either framing it as an exercise in futility or branding it as a downer of a question. Some took a semi-positive outlook, encouraging folks, and I’m paraphrasing here, “to not listen to the haters.” But…why?

Why should we fear critique? Why should we avoid acknowledging the work it takes to advance and excel this form of media? Why are larger streamers so adverse to collaborating on solving these issues? Everyone seems to have an idea of what will work, and depending on circumstance and privilege, they all can have an opportunity to try that. But many seldom ask the questions “Will this work?” followed up by “And have you done this before?” This outlook took me by surprise, honestly, and it prompted me to endeavor to write another post about streaming…but that’ll come later.

For now, let’s analyze the results! 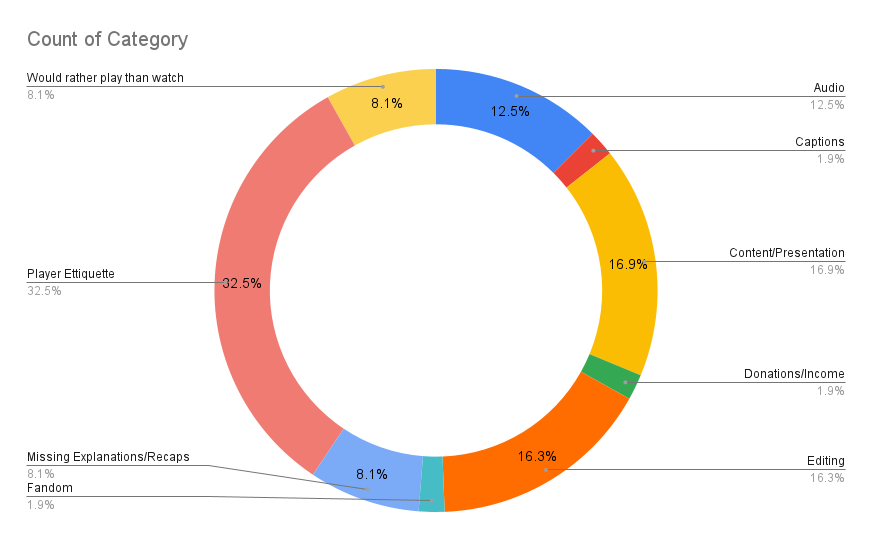 I found several commonalities between responses, and so I broke everything down into a related category. I tracked about 160 responses before I stopped, but the extra few that came in days after the original post only served to back up the initial breakdown. So let’s look at the categories! I’ll go into detail on all of these further down, but some category explanations here:

So what’s it all mean?

I get it. This can feel like a lot. My main point in bringing it up is that it’s important to take a good look into the time it takes to build a successful show. Many people find these solutions themselves over time, I know I did, but that’s time wasted. When I started there were only two other APs on the market and neither of them were Critical Role. I didn’t have many people to turn to for advice. So, here, take some advice form me. Take a second to go over these issues. Map out how you plan to resolve these with your own production. It’s going to save you a LOT of time.

You may not implement fixes – heck, you may not even see some of these as issues! And like I said resolving them all doesn’t mean your show will automatically be successful. But it will mean you listen to your audience and you are working towards creating a better product for them.

What problems have you seen with actual plays? What are some of your solutions? I’d love to hear from you!

Next
Producing Content, Part One - WILL THIS EVEN WORK??