Guardians of the Guildpact 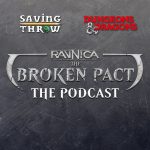 The Broken Pact
Guardians of the Guildpact

Season 2 Premiere! After the foursome returned from the Undercity they found themselves with more notoriety and clout than they’ve ever had before. Fame has its downsides…and also its privileges. As they reconvened at The Generous Stray, discussing their next move and going over new information, a new power player entered the fray with a tempting offer…

Next
Price of Fame