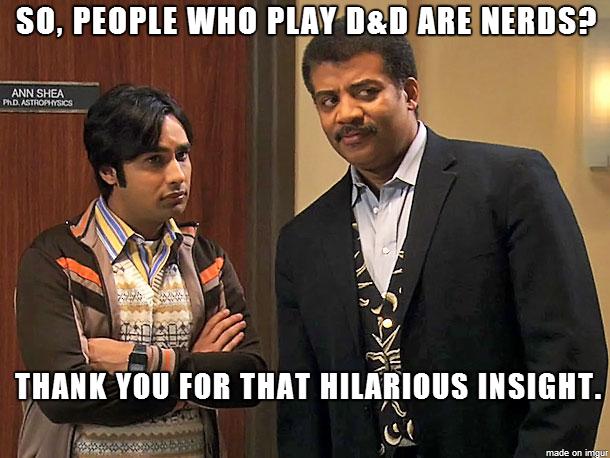 We’ve all seen it, and generally we all hate it. You’re sitting on your couch, sipping a frosty beverage, mindlessly staring at a television screen, when one of your beloved shows drops a Dungeons & Dragons mention.

Inevitably, two scenes later you are subjected to the horribleness of Hollywood’s perception of role-playing games. All-too-often it looks something like this, from season 6 of The Big Bang Theory:

Behold, the transcendent comedy billowing forth from what is currently the 3rd highest-rated show in the USA!

Anyway, I wanted to start this series to examine D&D references film and television, then grade them on the following criteria:

Accuracy — Does the reference utilize proper gameplay and use actual D&D terminology to depict the gaming session? Or are the references just inaccurate and lazy?

Originality — Does the reference say something clever or interesting about the D&D culture? Or is it just boring nerd-bashing?

First I’ll start with the cesspool that is the writing of The Big Bang Theory.

Accuracy = D- We’ll start with the terminology.I feel like the horribly overpaid writers of this show lucked into Boots of Speed, before screwing the pooch with the Helm of Lordly Might (no such thing…it’s a Rod, you assholes). Then they go right off the deep end with the sudden appearance of a satanic fungus (I imagine it’s looks something like a mushroom with goat legs)and they introduce the new prestige class, the bloodthirsty savage warrior (which gets partial credit due to the existence of the 2nd edition Savage kit in the Complete Fighter’s Handbook). The gameplay is equally awful. The DM actually chastises a player for daring to roll her own dice! Imagine playing D&D and not getting to roll a single die. Madness. Not to mention the fact that no one rolls initiative, no one rolls damage, and experience points are awarded in the middle of a goddamned combat.

Originality = F I wish I could invent a grade lower than an F, but unfortunately that’s the last letter in the alphabet, so I cannot. The Big Bang Theory is where originality goes to die, so it’s no surprise that their D&D treatment is predictable and lazy. D&D players are virgins! D&D players are nerds! Girls don’t play D&D! Every boring negative stereotype associated with Dungeons & Dragons is squirted messily into one awful little package, and those dicks providing the canned laughter are just lapping it up.

Comedic Value = F I un-laughed so hard watching this that I think I was actually frowning. I don’t mean to disparage the amazingly talented people who produce this television program, and in no way do I want to insult the comedic sensibilities of the millions of fans of the show, but this show is a steaming pile of corn-speckled dog shit, and anyone who thinks this is funny is not only an idiot, but they’re also an asshole. Dom is probably going to make me re-write this paragraph, but I’m going to leave it like this for now until I can come up with a more creative and less-offensive way of dissing this episode. [Nope, I’m leaving it in — Dom] 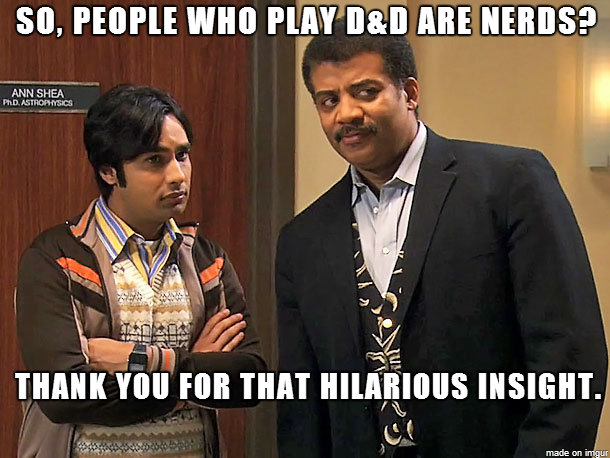 On the complete other end of the spectrum is Dungeons & Dragons & Bitches, a sketch from the comedy duo Key and Peele:

Accuracy = A- Holy damn I wanted to grade this higher. The level of detail showed that this sketch was written with love, by a fan of the game. There were a few minor slip-ups, but no doubt these were done necessarily to punch up the jokes. They nailed the idea that giants are not typically played as PCs, and they riffed on alignment, which is probably one of the funniest aspects of D&D culture. There are allusions to the Inn of the Last Home, King Isildur, Gollum, and the Eye of Mordor. The gameplay was surprisingly solid, getting high marks for the DM stopping Kanye the Giant from slapping the hobbit-bartender and saying he has to roll to hit first. Also high marks for the DM trying (in vain) to regain control of his metagaming players. The only knocks are the use of hobbit in place of halfling (no doubt a casualty of the punch-up), the absence of character sheets, and the fact that they didn’t specify what race of giant Kanye was…which I think was a missed opportunity. There were also the same damage and initiative issues from TBBT, but I attribute that to the DM being flustered rather than an actual oversight.

Originality = A If you’re not watching Key and Peele regularly, then turn off your goddamn computer and start watching now. They’re the masters of the fish out of water sketch, and whereas the beats in The Big Bang theory were predictable and tired, they are delightfully fresh here. Tyrell is not mocking D&D, he’s embracing it and making it his own. The DM is not flustered because he’s socially awkward, but because his methods for asserting control are being circumvented within the restraints of the game system. He’s forced to adapt in an effort to maintain the integrity of the game, and he is stymied in those efforts as he butts heads with the unstoppable force that is Kanye the Giant. There are very few “D&D = nerd” jokes, other than Key’s nasally drone, but those sins can be forgiven. In all honestly, you’d expect a nerd dig in a sketch of this nature, especially as a contrast to Tyrell.

Comedic Value = A This sketch does everything right comedy-wise, and it’s masterfully understated. It was the most-requested repeat sketch from one of Key and Peele’s Reddit AMAs. Not sure what else to say here. These guys are hilarious. 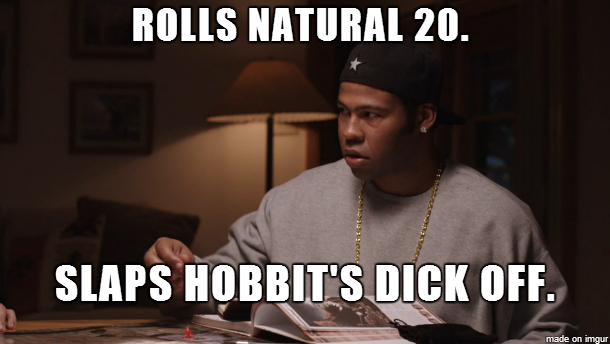 So there you have it. A navel-gazing look at how the world (or, at least, Hollywood) views role-playing games. With this series I’d like to delve into why such a rich, complex world has produced so many awful films and television series.

Next in the series I will tackle two sacred cows: Community and Futurama. How did those traditionally “friends to the nerd” shows handle the challenge of a Dungeons & Dragons episode? Stay tuned.

Next
Why I Like Saving Throw - by Tyler Rhoades

Great article! I hope you do the Dexter’s Laboratory episode D&DD and the Community D&D episode next.

Respectfully I disagree with your assessment of BBT, especially after you tout (sp) it as the 3rd largest show on television. There’s a reason for that… While I love Key & Peele, their outlook on D&D is waaay outside the box of the demographic that plays, or has played the game. I’m not saying it wasn’t hilarious, but while BBT dumbs it down for the masses, they do get several things right. And more importantly their ratings allows D&D to be in the public eye on a regular basis… K&P would not do a regular D&D sketch, it just wouldn’t pay off for their audience. While BBT can and has done many many references to it, on various levels since season 1.

But I understand the show is not everyone’s cup of tea. I concur with the comment by Mason, the Community D&D episode should talked about, also well done. I believe they are about to do another…