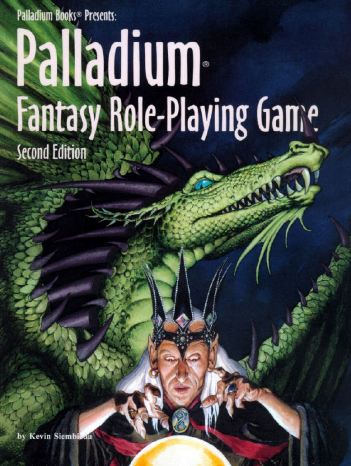 Hi. My name’s Ivan Van Norman. College was my first real experience of playing a role playing game. I was a player, it was only a one session campaign, and I don’t even remember what I was playing. However, I remember it was good, and it was the game that got me into making RPGs. That session sparked the continual flame that reinforces my need to be interactive while still telling a good story. But it technically wasn’t my first time…

I’ll be first to admit, I was a child of the 90s… a time when computers were first making their grand entrance into the consumer market. I have memories of the first Apple Computers in Kindergarten, and I’m proud to say that I’ve been building my own desktop systems since the age of 13. So it was on a whim I purchased a copy of Palladium RPG – 3rd Edition at a comic book store in the famous (and probably only) comic book store in Alaska named Bosco’s.

Why? Because it had an awesome dragon with a wizard staring into a crystal ball on the cover. What 12 year old WOULDN’T think that’s cool.

Palladium is still a crunchy system even for me today. So I sincerely had no idea how I was able to run even a simple game back then. I remember it happened over a weekend and my mother decided to pitch a big 3-room tent in the pine forest that was our backyard. It was the classic “kids camp-out” type of scenario, and late at night, I busted out my books and ran my first role-playing game for my friends.

To this day I can only recall one real moment from that session. I was explaining a goblin encounter to the group, and before I could even finish one of my friends blurted out, “I want to chop off the goblins balls and fry them!” I remember being INFURIATED because he had pointed out earlier during character creation that he was specifically buying a frying pan for this one purpose. I didn’t understand why he wasn’t taking my perfectly designed story to heart! I mean, I put so much effort to make this FUN for them!

What I eventually learned is that WAS FUN. It was fun because it was fun for him, and for the whole group, who could do nothing but laugh and get in on the joke. We were 13! What did I expect? I recall giving up shortly after that because I felt I wasn’t being “taken seriously,” but had I just enjoyed their joy, instead of focusing on being the GM, I would’ve had a blast.

There is a key lesson in this, if you are going to start role-playing: remove all expectations. Because you really have no idea how it will turn out. Funny, serious, silly, or life-changing every session is like sitting down and watching a movie that is being made up as it happens. If you are a seasoned role player: remove all expectations! Your group is there to have fun, and as a GM you are part of that experience. You may know your group intimately, and may even be able to predict their actions at times. But that is all the more reason to allow the unexpected to happen!

Be it your first time, or 100th time. It always helps to have an open mind and enjoy the fact you are all playing a game together. Had I known that when it was my first time, the group would have enjoyed a nice dinner of fried Goblin Balls after a long day of adventuring together.

Next
System Neutral - On Failure, Character Death, and Party Wipes