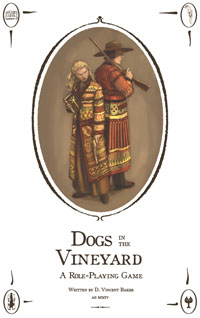 Lessons from the Indies: Raising the Stakes

In Vincent Baker’s 2005 indie RPG Dogs in the Vineyard, the players are God’s Dogs–think Mormon gunslinger paladins in a fictionalized American west. Sent out to deliver mail, protect the Faithful, and levy judgment on the wicked, the Dogs are invested with a lot of authority, and the brunt of the game’s dramatic power comes from players navigating complicated, morally ambiguous situations. The game routinely expects–demands, even–that the Dogs play judge, jury, and executioner to the communities they serve, and it doesn’t pull punches when it comes to showing a wide spectrum of Faithful, from the legitimately devout to the maliciously corrupt.

It’s a remarkable game in a number of ways, but requires a group of players who are willing to invest in moral dilemmas while embracing the fact that the game just works better when the players disagree, sometimes even to the point of using the conflict resolution system against one another. That system is the game’s greatest strength and biggest stumbling block; the system plays a bit like blackjack, with players taking turns describing their intentions and anteing dice. The more dice you have to use to match an opponent’s, the worse your result–and the greater the damage you’ll suffer in the end.

Where the system shines, though, is in the way it builds a sense of dramatic tension by letting everyone know what’s at stake. It does this through an escalating scale of coercion: first talking, then “physical” (running away, getting in someone’s face, shows of strength), then close combat, and finally, gunslinging. Players (and NPCs, for that matter) can launch into conflict resolution at whichever of the four stages they prefer, but generally speaking, the system is heavily weighted towards escalating up, rather than down. In a game centered around tough choices, this scale helps the players and the GM frame a very important: Is this worth fighting over? Do I want this enough to get into a gunfight for it?

Of course, “Is it worth fighting over?” isn’t a terribly useful question for Dungeons & Dragons or Pathfinder; the answer, at least when it comes to monster camps, roaming bandits, and dungeon dwellers is almost always going to be “yes,” because the games are primarily games about fighting interesting opponents and looting their corpses. The whole concept is much more useful when it comes to  social encounters.

It’s important to remember–and even more important to get the players to appreciate–that the C in NPC stands for “character,” meaning that they each have their own needs and wants and motives and fears. And social interactions are tricky! Some DM’s let the dice do all the talking; others prefer to give 100% priority to role-playing. I’m personally somewhere in the middle: I like to think of these situations as having their own escalation scale, one that starts on one end with “respect and favors” and ends on the other with “bald-faced antagonism.” When players do roll a check–or make whatever the system’s equivalent is–and want to try again, they’re free to do so, but I make it clear that the stakes are being raised on both ends. Their wheeling-and-dealing might convince the master of the silk guild that they deserve a spot in their caravan…or it might make him suspect that they’re spies and cutthroats sent by a rival.

Sometimes, I’ll just ask them: How far are you willing to push this? How much do you want information about the sorcerer? What are you willing to do to protect this town from the raiders? Players remember the tough choices they make, and it’s part of the GM’s role to make sure they get the chance to make them.

Of course, Dogs in the Vineyard encodes this principle into the game’s DNA, going so far as to tell the GM to “say yes or roll the dice”–meaning when the players try something, either let them do it or put something important in their way. But the idea–how do we let players know when we’re raising the stakes–is something that can be helpful in a lot of games. For some groups, death isn’t even on the table unless the player agrees that it’s satisfying; in others, it’s just the cold truth that characters can get killed by house cats (if they’ve suffered the proper Rube Goldbergian series of mistakes; or if they’re 1st level Wizards in Dungeons & Dragons 3.5–player’s choice).

Let me know in the comments–how do you like to raise the stakes? What’s your “escalation of conflict” look like? Most of all, how do you communicate what’s really on the line?

“How far are you willing to push this? How much do you want information about the sorcerer? What are you willing to do to protect this town from the raiders? Players remember the tough choices they make, and it’s part of the GM’s role to make sure they get the chance to make them.”

This is a great reflection that I hope everyone keeps in mind. I need to make a point to be more actively aware of this dynamic and give my players more chances to make those choices.

I’m in a somewhat interesting situation, as I GM a 7th Sea group that meets maybe 4 times a year for marathon sessions and has been running since 2013. Death is off the table, and our dynamic is heavily RP based. I want my players to ‘win’ their adventures in whatever way is meaningful to them, but since everyone is so invested in their character and the progression of that character, I have difficulty sometimes creating those tough choices. So far I’ve found it difficult to threaten the characters themselves in the traditional ways–maiming, loss of title and/or magical item, lifelong curse, etc–without them walking away from the table feeling bummed out and waiting for another few months until they can try to regain something of what they’ve lost.

I’ve had the most success when I create NPCs and storylines that they are invested in, and then use the fates of those NPCs as the “stakes.” Do they successfully save the farmer’s daughter? Do they bring the evil mayor to justice? How are they going to balance that? If they save the daughter from the impending blood sacrifice in the volcano, might the mayor use the time to escape? They might “win” in the sense that they gained a new ability or cool new item, but “lose” in the sense that the world did not end up as they wanted it.

Like with any good storytelling, consequences influence characters and sometimes those consequences may not manifest for months in a campaign (or for many, many gaming sessions). It’s hard to balance that when you want to players to still have fun and when sessions are so spaced out. But sometimes these consequences have a way of fueling the desire to return more than just simply wanting to play a game. I think you’re 100% on the right track.