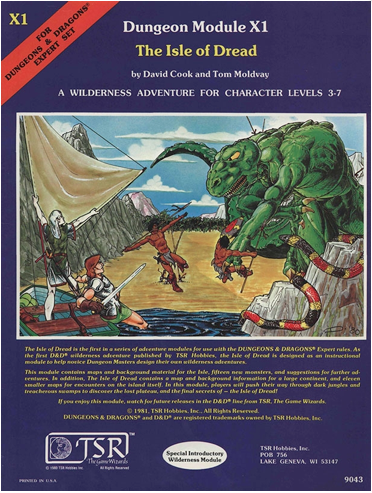 The Isle of Dread Walkthrough Map!

Hello! WOTC, hard at work on the final playtest for D&DNext, has published the final map for their playtest packet. And it’s none other than the X1: Isle of Dread!

Hit the jump to see the walkthrough map and head over to WOTC to download the new playtest.

The Isle of Dread constitutes one of the first adventures I ever played and was also one of the first to delve into, not dungeons, but jungles. My dwarf was none too pleased by this turn of events but the lure of fighting dinosaurs and exploring hidden temples was far too great.

Jason Thompson, of the Dream-Quest of Unknown Kadath fame, is the artist of note for this masterpiece. He’s captured every trap, encounter, and treasure room I remember. Click the map for a full size image to get the full effect.

I can’t remember exactly where my dwarf first died in this adventure. Could’ve been a battle with a T. Rex. Might’ve been via Mind Flayers. Or possibly it was zombies. Isle of Dread had it ALL. I can’t wait to venture back into the land of Kara-Tur and fight some lizard-folk!

What do you think? Do you remember your first crawl through the Isle of Dread? Are you excited for D&DNext and trying the Isle for the first time? Let us know in the comments!

Next
My First Time – Tyler Rhoades