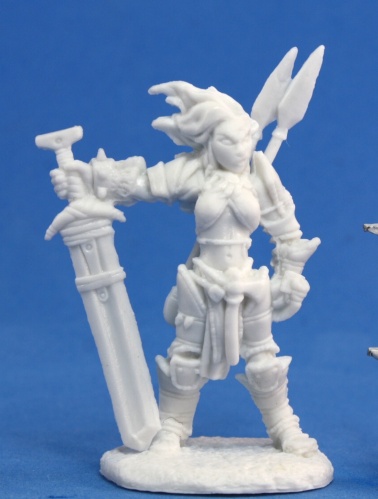 How We Roll – New Reaper Minis Kickstarter Over $1m

Reaper Miniatures have announced their second Bones series of minis and once again have taken to Kickstarter for the seed money to launch. Their previous outing blew the doors off their original goal and solidified Reaper’s position in the industry. Can their second series do the same, or better?

If you’ve been around the block long enough, you’ve no doubt played with miniatures. “Minis” if you’re in the know. A holdover from the grognard days of wargaming, miniatures are usually optional tools to help keep track of the action. Not only that, but they look badass.

Every player I know has a mini that is near and dear to their heart. The joy of rustling through the box of minis to find the one that matches your imagination. Of course, there’s always some drawback – “this is exactly what my male dwarf rogue would look like, if he were a female human necromancer.” Shrug. It works. But with Reaper’s new Bones series of miniatures the possibilities are nearly endless. The plastic molding is much cheaper than traditional metal-based minis, allowing for more variety and more savings.

Reaper Miniatures has been around since 1992 and has built a solid reputation of designing beautiful minis for use in games like Pathfinder, Dungeons & Dragons, and Savage Worlds. But it was arguably their first Kickstarter campaign back in July 2012 that garnered them the most attention. They raised over $3.4 million bucks that time with stretch rewards leading all the way up to the mighty Cthulhu!

For Series 2, they’ve once again set the modest goal of $30,000 and after just one day of the campaign they’ve raised over $1 million. They seem poised to shatter their previous record. The campaign has an extremely simple reward system. For $1 you get your foot in the door and can upgrade your reward to get the figures you want. For $100 you get the Core 2 set along with a bunch of add-ons made available via stretch goals. And holy crap, they have some amazing stretch goals.

What do you think? Do you play with minis in your games? Did you support the first Reaper Kickstarter?

Next
The Isle of Dread Walkthrough Map!