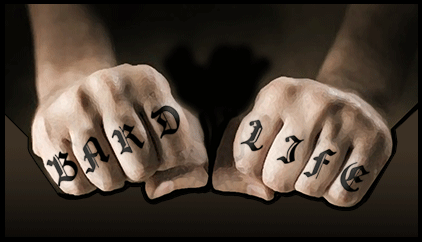 You’ve built the character. You’ve rolled the stats & spent the points. You’ve bought the equipment and you think you’ll make it to level 2. You might even “kick ass” when the time comes… but who are you? Making a character that survives is important enough. But to make an RPG exceptional – to get the most out of a game – you need to enjoy why they survive. You need to know what drives them to live… unless this is Call of Cthulhu. If you’re playing Call of Cthulhu you only need to know what drives them to go insane or die trying. But win, lose, or draw, knowing the ‘why’ is called getting into character.

This isn’t about learning accents, or tech-speak, or Latin incantations. Affectations like that can help others visualize your character, but don’t help you visualize how you want to play them. Writing actual songs or rhymes for your bard is inspiring, but knowing why they chose to become a bard will affect your character’s decisions and might even help build those songs.

Knowing your character’s motivations will help you to play a character consistently over a campaign and with enough backstory, you’ll get more out of non-combat encounters, and you’ll be able to truly celebrate your successes (and failures).

Yes. This is backstory and some players might be thinking that I’m suggesting you go and write a short story about your hero. Sure – if you have the time. Most GMs would love to read something that reveals your character’s goals so they can make a game more personalized. But let’s at least start by asking some basic questions of your character. Do you have any family? Was your childhood happy or tragic? Look at the skills your character doesn’t have, and ask why? Are you educated or did you have to learn everything on the street? I find that getting into character means learning to like your character. So find a negative and make it likeable. Look at your lowest attribute. Maybe your charisma or appearance score is low and you’re scary looking, but because of that, you’re loyal & honorable to those that can see past your horrifying looks.

I also suggest you try to avoid too much outright success in a backstory. Being a “total badass” isn’t really all that likeable and, at some point you’re rolling dice. Building your character’s identity on how awesome they are can easily backfire in game, and leave you feeling like the character isn’t fun to play. If they’re highly trained, that’s one thing, but most characters are level 1 & just starting out with real-world experience in life. So it’s best to let success happen on it’s own. If you concentrate on potential struggles, you gain perspective on who they are and it’s even better when you manage to pull it off in game.

Perspective on who someone is, or character development, drives future interaction with NPCs and other player characters. Memorable stories involves profound interaction between developed characters. It’s hard to enjoy a story when you don’t care about the hero. Bad things happen to help shape who a character is. Gaming is no different. In fact, if your dice are anything like mine bad things happen all the time, and this is the key to getting into character and better gaming in general: Learn to lose.

If you don’t create someone to care about conceptually, the only reason you’re playing is to win. Where’s the fun in that? But if you spend a few minutes understanding how they handle life’s tragedies, then failures become some of the best times for character development in an RPG (and don’t we all want to learn how to enjoy it when your dice fail you?). Well the best part of any well-told story is the conflict. Conflict in gaming involves chances to fail, and failures are moments for a character to shine.

A bad die roll and a broken shield is the perfect time to desperately fend off attacks with a log (or an Oakenshield?). A critical botch provides the best opportunity to have them blame the gun & throw away a perfectly good weapon in order to “save their ego.” Rolling an actual 1 is a fantastic opportunity to throw a one-liner and run away, cursing the gods while swearing you’ll be back. Rincewind from the Discworld series is a positively brilliant character and he’s a coward who fails at everything. While it’s not necessary to be a bumbling halfwit, it’s nice to know that a failure can still advance your character’s personality. Your character is in a story that you are helping write, and the more chances you have to get into character, the better the story is going to be… even if they die. But that’s another article.

backstorybuildcharacter
Previous
It's Just a Game

Very important stuff — the forgotten side of RPGs (that pesky “R” part). Being a badass is so boring, though I always delight in seeing the badasses fail their save and fall asleep. Great read!

I enjoy playing cowards, failures, and losers. No one expects them to accomplish anything and yet they often wind up a central figure in a campaign, because after a few sessions they offer the most conflict for a GM to naturally gravitate towards.