Hello Throwers! In this inaugural installment of My First Time I’m going to talk about the first time I played a RPG. My name is Dom Zook, I’m the creator of this site and subsequent web-series. Through the foggy haze of my memory let’s step back… back… BACK! Back to the Spring of 1986.

I was a wee lad, about 9 years old, and navigating a new school and making new friends after a recent move. I befriended a boy in my homeroom who had a koala backpack. I knew we’d be friends because we commiserated over wolves being the most awesome of animals. 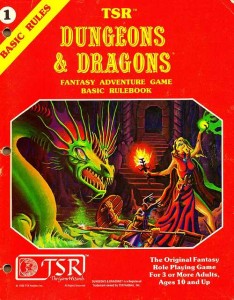 Anyway, we started hanging out and he asked if I’d ever played Dungeons & Dragons. Dungeons and what now? D&D. Those two letters were seared into my brain.

I started out playing a lizard-man warrior. Had no clue what I was doing. Keep in mind this was before the 2nd edition Book of Humanoids so it was pretty fly-by-night. After one session it was decided to retire that character and start anew.

I then rolled up a dwarven fighter. When asked for his name I blurted out “OrjuinWahweh!” My DM jotted down a rough approximation and my fighter became “Orjuin Warwe,” champion of his people.

What I possibly remember the most, however, was the sound of the dice hitting the formica table in the rusted out RV we played in behind his house. It was cozy. The northwest rain would pelt the roof as we discussed the drinking habits of Orjuin. Tddddkkkk! A 20-sided die hits the table resulting in a 18.

An 18 was the first roll I ever cast for my character. It was an attribute roll, so I was able to apply that number to one of my character abilities. Before you grognards lay into me yes, we rolled a d20, which was against the rules at the time. You’re supposed to roll 3d6 for attributes. But my DM wanted superheroes and who was I to turn him down? I filled out the rest of my green character sheet and away we went!

I remember the warm glow of the RV’s flourescents, which flickered if we rocked the vehicle too much. The intimacy of a two-person campaign and the joy of dungeoneering. Slaying goblins and orcs. Pocketing every possible treasure (encumbrance rules be damned!). It was invigorating to escape the life of a 3rd grader and suddenly become ANYTHING I wanted to be. I could be anything. I could do anything.

To say Dungeons & Dragons influenced my life would be a gross understatement. It opened my mind.

What about you? Tell us your First Time stories! What mistakes did you make? Do you still have the character sheet of your first PC? Tell us in the comments, and post your pictures to our Facebook group!

Previous
How We Roll: Dice Towers

Next
Digital RPG - Dungeons & Dragons: Lords of Waterdeep for iPad

I was a freshman in college at USC. I walked by an open dorm room and heard some (for lack of a better word) “interesting” dialogue coming from the guys inside. They were playing the original box set, paper-printed D&D (this was 1978). I was so curious about what they were doing … like some sort of play acting… that I wanted to join. Just to see what this was. My very first character ever was a human magic-user named Ramrod, with all of 4 hit points and one spell of sleep and one spell of magic missile. Oh my. Somehow I survived that first adventure where we went questing into underground catacombs and fought these things I never heard of before.. kobolds. For some reason, I was hooked. Holy crap, that was 35 years ago! And I’m still playing.

6th grade, my neighbor had the Red Box. I asked what it was all about, having kind of vaguely known about D&D because of a local toy store that had a robust game section and the cartoon of course. He loaned it to me and told me to try out the choose-your-own-adventure in the Player’s Handbook. I was off to the races.

I played for the first time in my early 30s while dating an East Side guy. I’d gamely said, “any hobby you’re passionate about I’ll bet I’d enjoy, too.” We’d been out a couple of times – enough to decide he probably wouldn’t murder me – so I put my money where my mouth was and invited him over to play. What I remember is that I missed the announcement that they’d killed Bin Laden and that the start-up involved a lot more simple math and pretend shopping than I expected. I got the distinct impression that he was humoring me and that I was doing everything all wrong. He explained what you could be and I picked a paladin. I named her Sorka after a dragon riding from Anne McCaffrey’s PERN series. I rolled some bad stats and decided my worst one would be strength. I also decided she was a scrawny 15-year old orphan, which he said was “too young.” I suggested that I buy a donkey to carry her gear and he laughed and let me. He got a $41 parking ticket while we were playing and was kind of a dick about it. We only played one other time and he was annoyed that I kept trying to help people he considered unimportant. A villager’s barn was burned down and I wanted to stay to rebuild it. I slowed down his game considerably by loaning my donkey to bring in the harvest. I liked to hide in the woods or the river when bad things happened. We won some treasure and I wanted to donate it to an orphanage music project and teach them the “magic” of washing hands and literacy. I thought this was what Sorka would want. Three months after meeting this guy I realized that his roommates, “friends from college” were poly-amorous couple, that he used to date the wife while they were married, and that they had role play plans for me that I wanted no part of. Poor Sorka. I didn’t even get to keep her worksheet. I hope she’s hiding well and not being molested by those weirdos. (I’d still play again someday though, because I assume that it’s the smart, imaginative Zooks of the world who make it fun. I’m watching your project with interest, Dom :)

Sorka must be saved! Thanks for sharing!