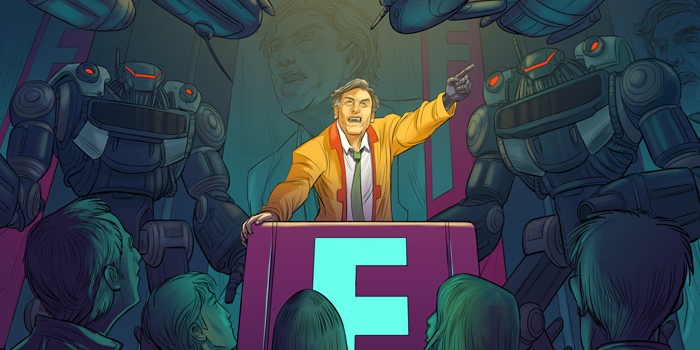 Neon Sanctum is a cyberpunk RPG in its Kickstarter phase. The developers have been kind enough to release the system and a playtest package for would-be funders to test the waters of the system, and I’m here to do just that.

The Setting
After an unknown apocalyptic event destroyed most of humanity and left the world a wasteland “filled with mutants, beasts and bandits,” humanity has begun to rebuild. There are three large cities that house the majority of humanity. Neon City is the oldest and largest; Haiden houses the affluent and is surrounded by shantytowns; and an unnamed city floats in the clouds, a product of technology from before the apocalypse.

Naturally, no cyberpunk RPG would be complete without mega-corporations and dystopian privatization. In a world without any government or public services, the man with the biggest bank account holds the power. (Hey, that’s pretty much how it works in a world with government, am I right, folks? Thank you, thank you, I’ll be here all day.) Corporate projects include arms, cybernetics, espionage, assassination, and slavery, all the typical cyberpunk fair.

Mutants also exist, people who have been, erm, mutated by exposure to Dead Zones, “whole regions that could kill those who entered silently and without warning.” The wild and fluctuating powers of Dead Zones have created all sorts of nasty mutations, none of which are the fun X-Men variety. The gorgon mutation, for instance, causes those suffering to “have sickly yellow skin tinged with areas of green, jaundiced eyes and constantly sweat out a thick poisonous sticky substance.”

The Mechanics
Neon Sanctum’s mechanics are relatively simple. The GM sets a difficulty ranging from 7-15, and the player rolls 2d10 + his various modifiers. Neon Sanctum has a twist on this system, however, and that’s the use of skill and item cards. Instead of having specific skill ratings (dots, skill ranks, etc.), players use skill cards to represent their specialties. When a player makes a skill check, he rolls 2d10 and plays one of his skill cards (if he so chooses). This adds a value to the die roll. Once success or failure is determined, the card is placed on “cooldown” for a time. Many of these cards have special combat abilities, such as the Smoke Cloud card. A Science\Chemistry card, it requires you to play a Chem Kit card, and then it grants a +1 bonus to defense to anyone in the cloud.

Here’s a brief intro into the use of Skill Cards from the Neon Sanctum team:

Transitioning to combat offers a twist on regular RPG mechanics. Using a traditional initiative structure and tactical combat grid, players use Action Points to refresh their cards, move, attack, and so forth. There are also NPC cards for the GM to use for his opponents. The developers admit that “[c]onstructing each individual NPC using Skill Cards would be a time consuming and arduous task,” something I think we’ve all struggled with in the past. Instead, NPC cards circumvent the traditional character building process by containing “the basic information that the DM needs to use a NPC, without skill cards.” Each card is like a condensed Monster Manual entry, which is not a bad thing.

Overall Impressions
I’ve withheld any strong emotions about Neon Sanctum for now, but my overall impression is mixed.

The setting is a standard cyberpunk fair, so if you’re intrigued by techno-civilization and corporate hellscapes, you’re in for a treat. The setting’s development is a little weak, however. The writers paint the setting in broad strokes, which allows for a lot of GM innovation and flexibility. On the down side, there’s not a lot of material for GMs to work with. Haiden, for instance, is a city based on slavery. That’s interesting, but there’s no expansion on the idea. The traditional image of a slavemaster is a man holding a whip while his slaves till the fields, but that’s not going to be the case in Neon Sanctum. What does slavery look like in a technologically advanced society? Lobotomies? Neural nodes? A few extra pages devoted to the setting and the major cities would go a long way for inspiration.

With regard to the mechanics, the game feels much more like a tactical combat game than a roleplaying game. The emphasis on playing cards, action points, and special combat abilities places the game’s focus squarely on fighting enemies. In a similar vein, the use of cards, tokens, and battlemaps that seem right at home with a tactical board game. In this case, the cards create an easy-to-understand system that facilitates engaging combat simulations.

Overall, Neon Sanctum shows a lot of promise. As it stands now, it feels more like a tactical shoot-em-up card game than a true RPG–and that’s not a bad thing. If you’re looking for a cyberpunk action game with sharp, stylized artwork, and a side of roleplaying, look no further. You can pick up a Playtest packet from their site here and try it out for yourself. Their Kickstarter is currently going with just 11 days left!

Next
Putting 'Microscope' Under the Microscope