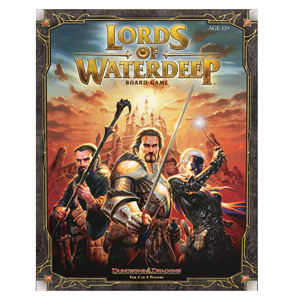 Hey players! While there’s nothing better than playing with your friends in person, sometimes that’s just not possible. So in those instances we like to inform you of ways to keep up with your hobby via other means, like mobile apps, video games, webseries and more! What better way to start off this series than by introducing the new Dungeons & Dragons: Lords of Waterdeep app for the iPad by Playdek, WOTC’s foray into D&D-inspired mobile games!

Playdek has long been known as a purveyor of fine mobile versions of popular board and trading card games like Agricola, Nightfall, and Ascension. Due to their successes with those games, Wizards of the Coast approached them to produce a mobile version of the Dungeons & Dragons board game Lords of Waterdeep. The board game itself is an adaptation of the popular pen & paper game, and is designed to be more accessible, introducing new players to the Forgotten Realms setting.

The game was announced at Gen Con ’13 but no official release date has been set. The game will support 2-5 players, just as the tabletop version allows, but will also enable you to play against some AI. Lords of Waterdeep for iPad

Have you played the board game version? What are you looking forward to in the digital version?

Check out the full article over at Kotaku!

Next
A Guide to Horror Games, Part 1