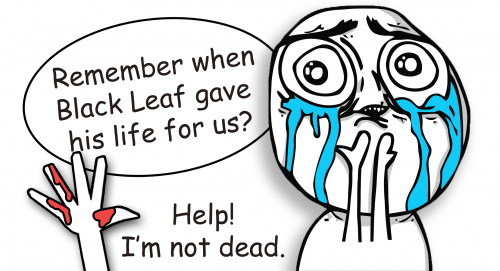 Remember watching some safe-for-kids adventure show when you were young and wondering how so many battles could happen without a single person dying? Every shot was non-lethal. People ejected from smoking aircraft just before they exploded. Cars went tumbling down a cliff only to have people climb out at the bottom dizzy but unharmed. As we got older many of us realized that not only was this lazy story writing, we realized we were bored with a show once it became clear no one was going to die. RPGs can suffer similar fates. A group of heroes are on some quest or some dangerous adventure of their own. If you take away the chance of death, the whole effort loses value. You see, in order to overcome and enjoy a challenge, there has to be an actual challenge.

Game Mastering Death – “How could you kill me like that?!”

GMs take heart because I know the nagging guilt that can take hold after you kill a PC. They may have spent ages building it, advancing those levels, bringing together an amazing concept and backstory only to watch them die. If they’ve never experienced character death, they’re probably going to be shocked and disappointed and the pressure to let them somehow survive, to find a way to leave them bloodied but not dead… that pressure is palpable. But death is almost essential to good adventure storytelling and if we’re to take anything from Game of Thrones it should be that even favorite characters in a story could die… and more than one.

I don’t advocate TPKs (Total Party Kills) as it points to an overwhelming likelihood the adventure was over the players’ level. If you kill a character with a Tarrasque, you’re probably not doing something right. But if your players don’t face death at least some of the time, they will increasingly push the envelope of “bravery” until they’re rushing dragons as though they were a nothing but giant EXP piggy banks. They’ll find the story less interesting and you will find their actions less tolerable. You might start seeking vengeance against the players or their characters might act like bored gods in your world, killing and looting at random. Death ensures that a game maintains enough challenge to temper blind aggression and to stimulate actual character development. Simply put, if a player doesn’t think their character can die, there’s little reason to worry about who they are.

So the simple tip I have for Game Mastering death is this: Make it worthwhile. No matter how simple the cause of death, don’t treat it like a casino bet (“Sorry, better luck next time”). You’re about to end a life and hopefully it was an interesting life. Make the death appropriate even by granting some liberties with how they die – One last move to make a heroic effort; One last chance to thwart the enemy or slow them down long enough for others to escape. Maybe the character is afforded the opportunity to say some final words, whether it’s something redeeming, or illuminating, or just funny. In any fashion and with any death, make the death become something more than a crumpled character sheet.

Facing Death as a Player – “That was so worth it!”

Heroics. In adventure, heroes make sacrifices to save something greater than themselves. Heroic stories are fraught with death and occasionally even the hero dies. But we don’t judge a story on who survives; we judge a story on how well it affected us (the audience). If you’re playing a character in a story and you’ve just hit the bottom of your hit points…don’t fight your GM about it. Instead, die gloriously. If they haven’t already given you the chance, ask for the opportunity to make a more meaningful death scene. Your character just died so it’s really not asking too much. It’s a chance to reveal that long standing secret through bloody coughs, or a chance to throw that valued magical weapon to another member of the party and shout, “Avenge ME!” Create a death worth dying for. A long time ago in a galaxy far far away, I played a stormtrooper who the GM allowed to pull the pin on a thermal detonator just before he was force choked to death by the BBEG. Boom. Legendary.

It can’t always be the most climactic moment. Sometimes a character dies before reaching the BBEG. There’s always a chance you die getting past the guards or you could die the victim of a nefarious trap, but if the GM is understanding, and you’re ready to take advantage of it, you will die a hero and be remembered.

Great post. I’ve killed off, maybe a half-dozen characters in my career. Two were due to incredible bad luck, and the rest were due to really bad decisions on my part. But as you say, the real threat of permanent death is an integral part of a good RPG.

I like the idea of a heroic death, but sadly most of my characters’ deaths were either horribly unlucky or totally avoidable. But they were all memorable, and I tend to think there’s a kind of beauty to the unremarkable death of a heroic figure. Achilles, Richard I, Robert Baratheon, and Elvis all bit the dust in decidedly non-Heroic ways. We can’t all go out like Richard III, King Leonidis, or General Custer, though I know that I’d prefer it.

Either way, thanks for the very thoughtful post. This is one of the many reasons that I’ve not tried my hand at GMing — I just see myself always chickening out and saving a character in mortal peril any chance I had. Just too soft.

Thanks, Tyler, and I hear ya. Sometimes a character death just feels like a dumb move or a bad roll…small and disappointing but a GM or a player can still manage to make it a little bit remarkable if they don’t get too distracted and take a second to make it fun.

And yes, killing a PC sounds awful unless it winds up being one of the most memorable parts of a game. I have a group that almost loves character death. They’re not suicidal but when they think they’re going down, they do their level best to make it even worse just for the story.

I could use some suggestions on a game Im running where I dont want the players to make new characters and thus dont want them to die. However I of course dont want them thinking they are invincible either. What are some alternatives to permanent character death that I could incorporate if they should meet an untimely end? Be as brutal as you want with suggestions.

Heres some I thought of:

I’m running a Warhammer 1st Edition game where players have “fate” points. They represent the fact that they’re an important piece in the plans of the gods. In Warhammer that translates as a way to avoid death at least once. The gods step in and change history. I’ve built on that and in short: they actually meet their god.

Their death was something of a vision which I describe in gruesome detail while back in reality, they’ve only been hurt very badly. Meanwhile on some otherworldly plane, their god or one of my choosing has decided to intervene and I roleplay out the conversation with the player. Morr (God of Death) has a conversation in a mist covered graveyard. Loec (Elven God of Sword Dancers) teases and intimidates the ‘dead’ elf while showing it a snapshot of the future.

Require some kind of tribute or quest or change in behavior once they are returned to the living. Sometimes I give them a cryptic message followed by successive visions. Sometimes I require that they protect the poor or watch over another player more closely. But I’ve made sure it’s not a simple “you’re dead and now you’re not”. It has a cost for the player as well as using it to further the story.