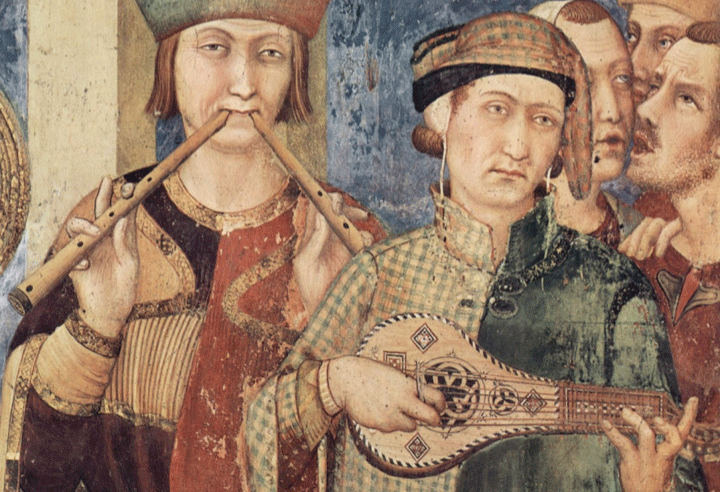 Ah the Bard: Victim of the RPG; Comic relief of fantasy stories and film; The horse’s ass of tavern scenes and battle scenes. Bards are too often looked at as effete minstrels and jugglers, wearing brightly colored hose and shoes with little bells. GMs have made the bard sing for his supper (actually requiring a player sing a spell… as the party laughed and the player squirmed). So what’s the reasoning behind this mean streak towards just another spellcaster? The prejudicial snap judgment apparently stems from vague rules or overlooking a couple subtle remarks within them.

So let’s look at an old gaming favorite and see what we’re missing in those rules. I’m going with Dungeons & Dragons 3.5 Player’s Handbook as a conservative RPG sample.

“A bard works magic with his music and poetry”
or
“Every bard spell has a verbal component (singing, reciting, or music)”

Did you catch it? Did you see what is so often disregarded? Here’s how to flip the bard and make these characters some of the coolest, the wittiest, and yes, some of the most downright entertaining characters in a campaign. Music or singing is not a requirement. Performance of some kind is required – yes. But being forced to sing sweet lullabies isn’t required and personally I don’t encourage it. Bards can be poets, actors, riddlers and more. So lets look at a couple bardic options to give you an idea of what I mean.

Poetry…so sweet and innocent. Hardly. This bard performs the poetry of the people. A formal rhyme and meter plus a healthy serving of humor gives us the Limerick. Work some spells into 5 line limericks and have the party laughing with you instead of at you.

It can take some creative preparation to write a few good limericks but a sneering bard telling dirty jokes while sending goblins running in fear is more than worth the effort.

You see because music and song is so often mentioned throughout the class and spells, it’s easy to forget that oral performance is the key component and remember that bards usually don’t have the same restrictions as wizards and sorcerers so, for instance, if evil looking armor and slinging spells is your thing…

Imagine an actor in blackened light armor decorated in prints of even blacker gargoyles and red demons inlayed. He stands brooding and distant with a sword at the hip and carries a pack filled with books of centuries old scripts and staged plays. To channel his magic, this morbid hero recites a line or two (and even stage directions) from some forgotten play.

CRUSHING DESPAIR (lvl 3 bardic spell)
Such pain are players meant to fulfill
Aye, but to die and go we know not where.

At no point did he strum a lute or harp. It didn’t even rhyme. The Dark Monologue is like a villainous thespian or a dictatorial director. He or she orates powerfully – but not musically.

And it isn’t necessary to write lines for every spell. You can, if it’s easier, say, “my bard recites a rather nasty poem about a blade that misses the taste of blood… and casts LOCATE OBJECT.” No other class requires authoring all your somatic components. But fashion a few samples of your character’s style and you can then fashion a character that no member of the party (or players) will expect to start a rousing chorus of sing-alongs in order to cast DETECT MAGIC or CHARM PERSON. Even with a spell like LULLABY you are not forced to use song. You are not forced to be happy and light hearted. You are not forced to be uplifting. Bards can be dark, clever, and very sarcastic. Most fantasy settings are places where entertainment was itself often mean spirited and cruel. If you’re worried about feeling out of place as a bard in battle or deep in a dark dungeon, then creating characters who whisper foreboding lines of epic poetry will more than fit your cause.

Know how you intend to vocally perform and make it a style you are comfortable with as a player. Make the performance suit your design and not the other way around. In this way, you can fulfill both the mechanical requirements of the rules and the more theatrical requirements of a fantasy story.

bardslullabymonologueperformancepoetrysongthespian
Previous
Creating Villains: The Ones You Love to Hate